Spring is a busy time for bees and bee keepers.  In a previous post I described some simple measurements of our bee hives that help confirm the queen is producing new brood and the bees are active.  Recently I added a weighing device to a hive in our garden with the aims of a) seeing the hive weight gradually increasing over the period of peak honey production and b) detecting a swarming event by a sudden drop in hive weight. 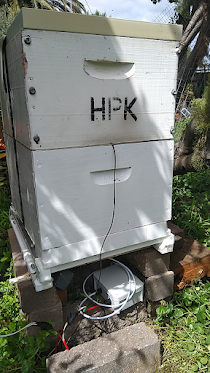 In summary the additional electronics consists of 4 strain gauges plus an HX711 interface chip that converts the the differential signal from the strain gauges to a 24 bit digital value, which is then fed via a serial interface to the existing Pro-Mini micro-controller and LoRa radio system.  A swarm is detected by checking for a drop in hive weight by at least 500 gm over about 30 minutes.  When this happens the system sends me an SMS.

This picture shows the bee hive with brood box and super sitting on the hive "scales".  I used 4 low-cost strain gauges from E-bay, typically employed in bathroom scales. One is located under each corner of the hive.  The black cable entering the rear of the brood box goes to a thermistor in the "brood ball" and gives the blue signal in the plot below.  The green plot is the external temperature.  The white box contains the micro-controller and LoRa radio. 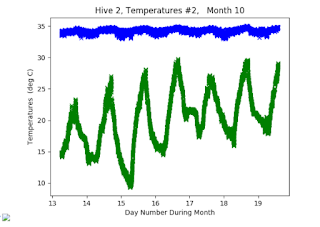 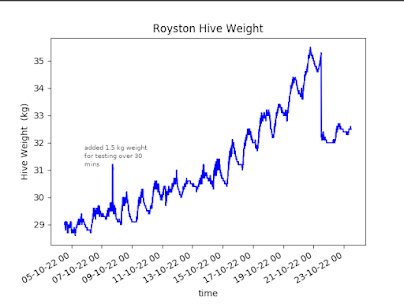 I was not expecting to see many swarms detected by additional electronics, but unfortunately we've had two in the last month!  The first weight plot shows a pretty dramatic drop (over 2 kg).  This "primary swarm" happens when the old queen leaves, with a significant fraction of the colony.  It went into a neighbour's tree and I was able to capture it and start a new hive.

The time scales of the temperature and weight plots overlap and it's interesting to see (before the swarm) that the hive weight is increasing more rapidly during some warmer weather.  This Spring in Adelaide has been unusually wet and cold. 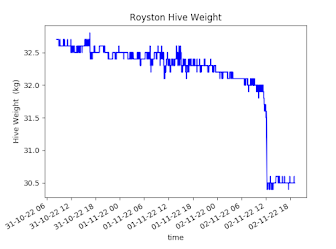 A secondary swarm occurred yesterday. It was smaller in number of bees and the weight drop is also less. The weight reduction is not just the bee weight - they eat lots of honey before leaving for sustenance while finding a new home. This swarm went into another neighbour's garden and was easy to catch.  I gave these bees to an apiarist in the Bee Soc. of SA. We are fortunate to have very understanding neighbours!